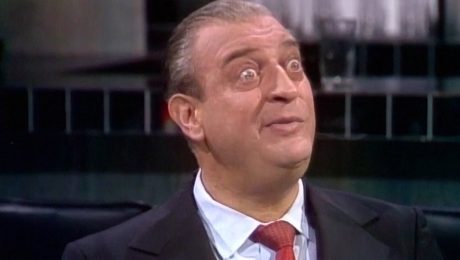 Here are some of my favorite Rodney Dangerfield jokes… I will update as I uncover more gems from his old performances, especially those on the Johnny Carson Show. If you have any you remember, post them in the comments or send me an e-mail.

I have to tell you. Last week I was in rough shape…

It was birthday, and my wife signed me up for a Bridge Club… I’m supposed to jump off next Tuesday.

I went to the track, and at the opening gun they shot my horse.

I went out to a bar to have a few drinks, and relax. The bartender asked me what I wanted. I said, “Surprise me!” He showed me a naked picture of my wife.

My marriage is on the rocks again. Why, just the other day my wife broke-up with her boyfriend.

It’s tough to stay married. My wife, she kisses the dog on the lips, and she won’t drink out of my glass.

The other day I came home after a long day, and decided to take a nap on the couch. While I was sleeping, the house caught on fire. I could hear my wife whispering to the kids as they ran out the front door, “Be quiet, or you’ll wake-up daddy.”

I was talking with my wife about the house, and I told her I wanted to take out a home improvement loan. She gave me a $1,000 bucks to move out.

With my wife, it is always something…

Her father died. And instead of burying him, or cremating him, she had him frozen. Now, every time I open the refrigerator to get a snack, he falls out on top of me.

Last week, she crashed the car up against a tree. She said it wasn’t her fault. She blew the horn.

My God, is my wife a terrible driver. Under the rear-view mirror she has a pair of shoes hanging. They belong to the last guy she hit.

Just last night, I was sleeping and I woke up when I heard my wife saying all sorts of sexy things. I looked up, and she was on the phone.

Nothing in my life goes easy…

The other day I bought a water bed, and there were two Cubans swimming in it looking for Florida.

I know I am an ugly guy…

I went to a freak show. They let me in for free.

After I was born the doctor turned to my mother and said, “I did all I could. But I am sorry. He pulled through anyway.”

When I was born, after the doctor cut the umbilical cord, he hung himself.

On Halloween, my wife sends the kids out looking like me.

On Halloween, when I open the door, kids give me candy.

I asked my Dad why he never took me to the zoo. He said, “If they want you, they will come and get you.”

I used to work at a pet shop as a kid. People kept coming in and asking how big I’d get.

I always had a hard time with my mother…

My mother never breastfed me. She said, “I like you as a friend.”

My mother had morning sickness AFTER I was born.

I get no respect from anyone. Least of all my parents…

One summer, I got lost at the beach. I asked a cop to help me find my parents. I said, “Do you think we will find them?” He said, “I don’t know, kid. There are so many places they could hide.”

My father never loved me. One day, I was walking home from school and I got kidnapped. They sent part of my finger back with a ransom note. My father said he wanted more proof.

My own family doesn’t love me…

My uncle’s dying wish was that he wanted me to sit on his lap and to hold me close in his final moments. He was in the electric chair.

I know I’m getting old…

Times are tough today. People need to watch-out when they have sex…

I was talking to my doctor. He said that just last week he had 6 cases of VD in his office… He’s alright now, of course.

I know I drink too much…

Just the other day, I went in for a check-up at my doctor’s office. I gave him a urine sample. I looked in the cup, and there was an olive in it.

My doctor is quite a character…

I told him, “Hey, doctor. Everyday I wake up, and look in the mirror. And then I want to throw-up. What’s wrong with me?” He says, “I don’t know. But your eye-sight is perfect.”

I get no respect, I tell you…

I was so depressed the other day, I called the Suicide Hotline. They tried to talk me into it.

I was so depressed the other day, I was standing on a ledge of a building. My priest shows up and says, “On your mark…”

The other night I told my kid, “You know, someday you will have children of your own.” He said, “Yeah. So will you.”

My wife and I made an agreement when we got married that we’d only smoke after sex. I just realize I’ve still got the same pack from 1978… Meanwhile, my wife is up to three packs a day.

I’m working all the time. You probably didn’t know this, but my father was a work-a-holic. Every time you mentioned work, he’d start drinking.

I finally solved my drinking problem. I joined Alcoholics Anonymous. I still drink, I just use a different name.

Man, when I drink and get loaded, I don’t know what I’m doing. The other night I got drunk and went to a gay bar. There were 15 guys for every guy.

Nothing is easy for me. Just when I start to look out for number 1, I step in number 2.

My wife and I… We never have sex. We get undressed and we can’t stop laughing.

The one thing about sex with my wife is how loud she screams. Especially when I walk in on her.

I know my wife cheats on me. Every time I come home the parrot says, “Quick. Out the window!”

My kids are no bargain, especially my daughter. They call my daughter Federal Express. Because when she goes to a guy’s apartment she absolutely, positively has to be there overnight.

This one girl I met, man was she fat…

She was so fat, when she wore high heels she struck oil.

She was so fat, when I met her at the Macy’s Parade she was wearing ropes.

She was so fat, she was standing alone and a cop told her to break it up.

She was fat and ugly… How ugly? I took her to the beach and people asked me what I used for bait.

She was so ugly, when I took her home my mother put newspapers on the floor.