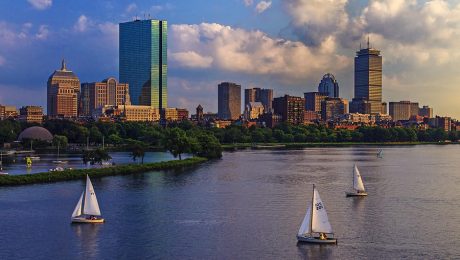 As a New Englander, Concordian and person who was born in the great city of Boston, I could not be more proud today.

Boston was selected by the US Olympic Committee to be America’s host-city nomination for the 2024 Summer Olympics.

The city of Los Angeles was favored. Some even thought of San Francisco as the sexy pick. I am willing to bet that there were many in the DMV that thought Washington, DC had a chance.

It was not to be.

The city of Boston, with its history, infrastructure, scores of colleges and universities, and brilliant, hard-working people who are about as fanatical about sports as any in the world, won out.

Developer John Smith, who has spearheaded the effort to bring the Olympics to Boston said, “A Boston Games can be one of the most innovative, sustainable and exciting in history and will inspire the next generation of leaders here and around the world.”

I believe he is right.

There are opponents to the Olympic games being hosted in Boston. Chris Dempsey and Liam Kerr, co-chairmen of the No Boston Olympics committee, and sports writers like Gordon Edes, will have their say. And if you’ve ever followed Boston or Massachusetts state politics, you know that no major infrastructure project goes as planned, under budget and without casualties to the justice system.

But even though I know of the past, I am still excited to see my home city be selected to represent America’s bid for the 2024 Summer Olympics. The Olympics will not make Boston great or elevate it to a world-class city. We already are a world-class city. I think winning the Olympics will be a gift to the athletes and people from all over the world that no other city can replicate the way Boston can deliver.

North Korea, the clandestine and isolated regime located in between China and South Korea, has one thing in common with timeRAZOR: Neither give in when it comes to a launch!

Of course, North Korea launched a long-range missile to try and put a satellite into orbit (so they say), whereas timeRAZOR launched a “Never Miss Out” application designed to cure people’s FOMO (fear of missing out), satisfy the craving behind YOLO (you only live once), and make everyone as famous as J-LO. Well… Maybe not the last part…

So, even though they are both incredibly focused, driven, and don’t take “NO” for an answer when their leadership teams want to do something, here are the top 5 ways timeRAZOR is NOT like a North Korean missile launch.

5. timeRAZOR’s product did not break apart and plunge into the ocean a few minutes after launch.

4. timeRAZOR has established powerful business partnerships with companies to fill its app with exclusive offers. In fact, timeRAZOR wants to expand their relationships with major brands (click here for brand info). North Korean missile launches? Not so much.

3. timeRAZOR has the largest aggregated database of events, sports, entertainment and nightlife activities in the country, so they can always find something to do. North Korean missile launches come only once every few years, and its pretty much an invitation only event.

2. North Korean missile launches do not come with real-time traffic alerts that tell you when you need to leave so you won’t be late and miss out.

1. timeRAZOR fans are excited when timeRAZOR sends them interesting events close to where they live, work and plan to be – so it is easy for them to discover new things to do. And let’s face it… Nobody in the world wants North Korea to send them a missile.

Key takeaways – Get the free timeRAZOR app now for your iPhone and Android and avoid the North Korean missile.

Dear Yahoo!,
I have decided to terminate my account with you.

I’d like to tell you it’s not you – it’s me… And that it’s nothing personal… But… It IS you and it IS personal.

You don’t meet my needs, and have not for a long time. You are a sub-par technological redundancy in my life.

Good luck. I hope you find a way to make someone else happy, and provide services and technology that enhance their productivity.

I received an email from Darcy Kohn at Ripple Communications informing me that the Intelligence and National Security Alliance (INSA), ODNI and government agencies in the intelligence community, are seeking presentations highlighting the latest research and technology that can best benefit agencies involved in national security.

Presentations are conducted before a panel of “75 government scientists and technologists, selected by the ODNI.”

The event, known as the “Innovators’ Showcase,” will take place on April 26th, but abstracts are due Monday, March 19th. Per Darcy, “the Showcase offers industry leaders to gather and share classified projects and technologies with their peers and government agencies and the tangible benefits for national defense and homeland security efforts.”

timeRAZOR, a new concept being developed by Blue Canopy and mysbx / GovWin founder Jeff White (@Jeff_White1347) and SEO / online marketing expert Victoria Clark (@NotVicki), is building towards a launch. While I am under a total information lock-down, an early glimpse of what is in the works is extremely exciting.

One way to get an early scoop of what timeRAZOR is all about (apart from reading news updates in this space) is to sign up at: http://timerazor.com/s37jv.

You also can stay informed about the company through their daily tweets @time_Razor.

So, what is Gov 2.0 mean to a government contractor? What does it mean to the government?

Gov 2.0 brought together innovators from government and the private sector to
highlight technology and ideas that can be applied to the nation’s great
challenges. The Summit featured discussion in areas such as education,
health care, jobs as well as social media, cloud computing and mobile
technologies.

Below is a replay of tweets and comments made throughout the Gov 2.0 Summit, as well as a collection of pictures from the event. If you did not attend the event, this is an excellent way to get a snapshot of the event, and many of the key issues and thoughts presented over the two-days.