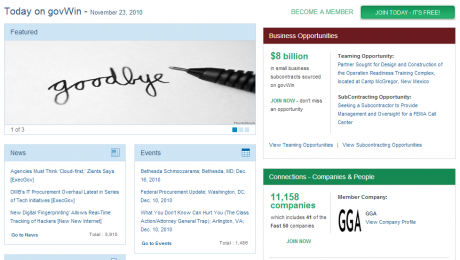 After some careful consideration over the last few weeks, I decided to leave Deltek to pursue other opportunities. Last Friday (March 9, 2012) was my last day.

With this transition there are a couple of important things I want to convey:

1) I will miss the daily interactions with government contractors that made my role as the senior community manager for GovWin.com so unique and special. It is profoundly rewarding to work with companies of all shapes and sizes that are trying to make adjustments and improve their overall operations so they can compete for government contracts. At GovWin, we conducted a wide variety of video interviews with executives designed to showcase what companies are doing in a variety of sectors. We conducted roundtables, brought in experts for Q&A sessions and much, much more. The proof that these were the right things to do was illustrated by the executives, consultants and others from across the industry that I worked with who not only appreciated the information and value to their business, but also how they were treated in the process.

2) I will miss the daily interactions with the people at Deltek who were less concerned about process or having control, and more focused on building a positive relationship with the consumer. At the end of the day, engaging with prospects and customers in thoughtful and meaningful ways is the best path to understanding what people really need to be successful. It takes more time, energy and commitment, but establishing a relationship takes time, energy and commitment. Given the pace of business (and the rather slow pace of government contracting), relationship building is the cornerstone of success. For those whose emphasis was on sales numbers or leads on a spreadsheet, you are only limiting your own potential and that of your team and company.

3) This does not mean I am leaving the world of government contracting. I plan on taking a break for several months and then getting engaged when the time is right – and with those people who want to make a difference for small and mid-sized businesses in the GovCon marketplace.

GovWin has updated the opportunity match score a company receives to include contract vehicle and place of performance. Also improved is the way matching is done for clearances, socio-economic status and end customer to account for hierarchy.

Here are some examples where these changes will play a role:

The Opportunity to Ask is Now: Cloud and Cybersecurity

As part of the Virtual Executive Roundtable series that we started at GovWin.com, we have put together two outstanding panels of experts – one to cover the government’s cloud initiatives (February 16) and another to address the new programs and efforts to enhance cybersecurity (March 9).

But going beyond forming a panel of leading cloud and cybersecurity speakers, we decided to try something a little different with these roundtables. Instead of having the audience sit and watch a long series of slides and data, we have decided to get more people involved and help drive the flow of the conversation – before, during and after the event.

The process is simple. Just register for the events (registration is free). And then post questions in our Q&A forum. When the event is LIVE, submit additional questions and answer polls. Then following the event we will keep the conversation going with our panel, provide an event recap and video, and explore the topics and issues we need to address next.

TO THE CLOUD! GOVERNMENT CLOUD INITIATIVES

Though the cuts to Defense Department funding is a close second, the shock of GTSI’s suspension by the Small Business Administration from receiving new procurement work on October 1st reverberated through the government contracting space. Though the suspension lasted just a few weeks and has since been lifted, the allegations GTSI improperly subcontracted through other firms to gain access to contracts set aside for small companies caused significant damage to its reputation and led to the resignation of its CEO. According to analysts, this was the most significant suspension of a top-tier contractor that many in the industry can remember, helping to make it our #1 story of 2010.

Why did the suspension of GTSI mean so much to the GovCon space?

In 2010, U.S. Defense Secretary Robert Gates announced his plan to cut 10 percent in spending on support contractors and overall spending cuts over 5 years totalling over $100 billion. The move has not been without controversy in the government contractor community, the military and among political leaders. For starters, Gates proposal includes dismantling of Joint Forces Command based in Norfolk, VA, which impacts thousands of jobs. The proposed cuts on contractor work, which is expected to roll some work to full-time government positions, also is being felt across the country.

The leaking of sensitive government documents and spread of content online has renewed some emphasis on security and increased some restrictions on what government employees can view online at work, what people can access and how easy data can be transported and shared.

Why does it matter to the GovCon space?

The Obama administration has pushed over the last couple of years to increase insourcing or the hiring of direct government employees over contractors. In 2010, the debate over “insourcing vs. outsourcing” seemed to intensify, with contractors and groups expressing their displeasure, and the government trying to soften the impact of their policies. Still, government officials continue to be focused on bringing work back into agencies.

Why it matters to the GovCon space?