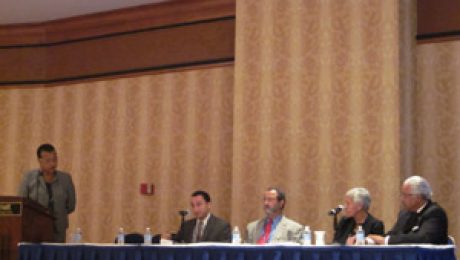 In this morning’s MED Week session, “Gems of Wisdom,” entrepreneurs who went through the 8(a) program and a representative from small business programs at the Department of Defense (the DOD OSBP) gave some key advice for minorities looking to successfully get business with the federal government.

SBA Deputy Administrator Marie Johns kicked off the session by saying that the Small Business Administration (SBA) goal is not about “reslicing the economic pie, but growing the pie to bring all people into economic prosperity.” To that end, she said, forming new teams and establishing new partnerships is important for all small businesses looking to succeed.

Farooq Mitha, Small Business Programs (DOD OSBP), said that “The best way to get our attention is to be patient and persistent.” He said that less than 10 percent of the people who initially communicate with him and his colleagues ever bother to follow up.

By not being persistent, people miss out on opportunities or support that could benefit their companies. Mitha added, “aligning capabilities with our requirements” is one of the most important things you can do when seeking business with the DOD.

Use the 8(a) Program

Amos Otis, President and CEO of SoBran, told the audience to “participate in as many programs and classes as you can” and to always believe in yourself. He strongly recommended using the 8(a) program to secure as much business as possible, both inside and outside the program.

The other pieces of advice Otis had were “You only fail, when you fail to try again” and “Make sure when you commit, you can execute.”

What Doesn’t Kill You

M. Charito Kruvant, President and CEO of Creative Associates International said that hard work and integrity were her keys to becoming the largest woman-owned federal contractor in the country. Kruvant said that she “had a hard time getting into the club” at the start. “Being a woman at that time, if you did not have pennies in the bank, it was difficult to convince people to do business,” she said.

Overall, she was “thankful that we had to go through those difficult stages.” She said, “the questioning that you can do it is always constant,” but persevering when “the world tests you” makes you stronger in the long run.

Kruvant also recommended that business owners do their homework. She said it was “very important to learn from the best, so I studied the primes.” But at the end of the day, integrity and the ability to deliver are critical.

Wayne Gatewood, President and CEO of Quality Support, said that when he got started, “I didn’t know how to dress, or how to talk, but I had a vision.”

In his view, “an entrepreneur is a creator of opportunities.” If you want to be a success, you need to “swim in the sea of people” and “broadcast your capabilities.”

“People,” Gatewood said, “are not going to come to you for work.” He stressed the need to look for teaming opportunities, learn how to read RFPs, write proposals and “work smart.”